It’s been nearly 2 years since the launch of Badgers BTC focused vaults, and it felt like the right time for a major upgrade. From the core tech infrastructure, to opening up deposits to any assets and introducing yield maximizing rewards, Badger vaults have truly evolved. They are now focused on one thing, enabling users to earn more by doing less.

An Innovative New Approach to Earning

We can all agree that building a lucrative earning position in DeFi can be a full time job. Where should I deposit my assets? When should I claim my rewards? How much will it cost in gas? What more can I do with them after I claim? While self custodial earning can be extremely rewarding, it certainly requires significant attention to detail. With the latest innovation in Badger vault technology, users can now let Badger do all the work for them while maximizing returns.

Yield-Bearing Rewards automate and optimize the complex series of ongoing transactions required to make the most of DeFi ecosystems like Aura and Convex. From the moment you earn them, Yield-Bearing Rewards are put to work earning rewards of their own, maximizing the overall return on your deposits. No staking, locking, delegating, voting, bribing or claiming. Just earning more by doing less.

To help contextualize this even more, let's take a look at how the WBTC/Badger Aura LP vault distributes rewards. 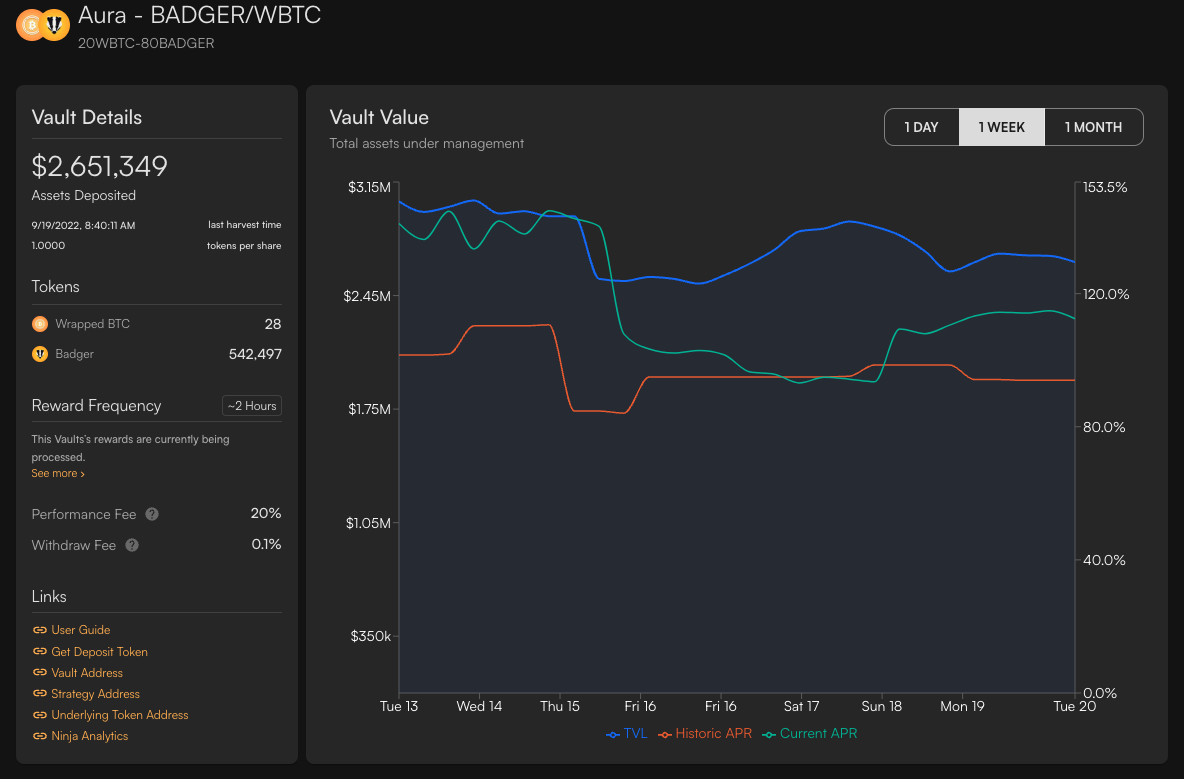 Users of this vault must provide liquidity to the WBTC/BADGER pool on Balancer before returning to the Badger app to deposit their LP tokens into the corresponding LP vault. Badger smart contracts then deposit these tokens into Aura in order to benefit from their boosted yield position within Balancer.

But why not deposit directly into Aura yourself? Yield Bearing Rewards of course.

Instead of simply distributing AURA and BAL, Badger distributes yield bearing versions of these reward tokens in the form of graviAURA and bauraBAL respectively. These rewards help users optimize their exposure to the growing bribe marketplace on Balancer/Aura along with earning from the revenue share Aura distributes to auraBAL holders.

How are these yield bearing?

graviAURA is a liquid locked version of the AURA token designed to support its own liquidity on Balancer. It has a built-in voting processor that enables it to automatically vote for pools in which it is deposited while also voting to collect bribes. Those bribes are then automatically converted to BADGER and graviAURA before being distributed to depositors. This ensures it is actively earning yield while remaining liquid enough to swap out of.

bauraBAL is the Badger staked version of auraBAL, received when auraBAL is deposited into the corresponding vault in the Badger app. In the case of the WBTC/BADGER Aura LP Vault, Badger uses the BAL rewards received from staking in Aura, mints auraBAL, deposits it into the auraBAL helper vault in the Badger app which then stakes it with AURA. By receiving bauraBAL, users are receiving an actively earning, staked version of the auraBAL token.

Read more on the benefits of auraBAL.

How will I know how much my rewards will earn?

We’re glad you asked. There have been some exciting new updates to the Badger app, more specifically around how APY is displayed. 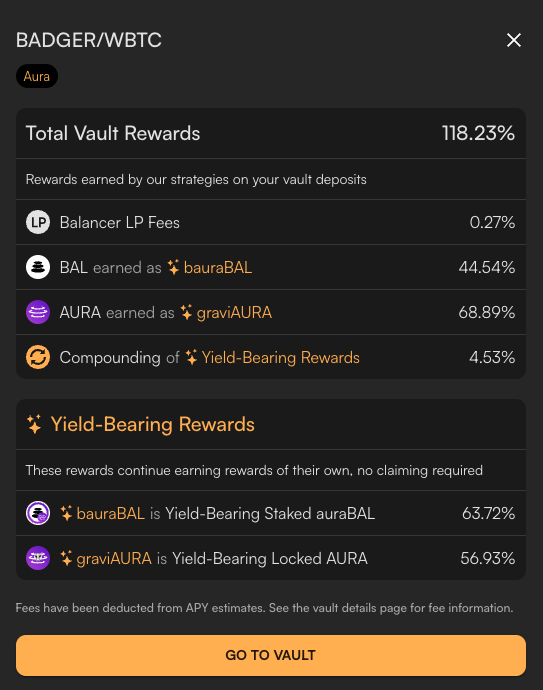 On top of seeing the cumulative underlying APY, users will now be able to see what yield bearing tokens they are receiving in addition to the corresponding APY they are actively earning while remaining unclaimed.

It is however important to note that the Yield Bearing Reward APY only applies to those yield bearing tokens that have been earned. It does not apply to the entirety of a users' deposits. The contribution to the underlying APY is displayed as a compounding % generated by the yield bearing tokens.

Expanding into the Balancer/Aura Ecosystem

The DeFi ecosystem continues to evolve at a rapid pace, with new and exciting players constantly entering the game. Most recently, there has been significant growth across the Balancer ecosystem with the introduction of Aura, a protocol built on top of the Balancer to provide maximum incentives to liquidity providers and BAL stakers. Think Convex but for Balancer instead of Curve.

After months of development and testing, Badger is excited to officially expand our vault product to support the Balancer and Aura ecosystem with the unguarded launch of 5 new vault strategies.

These vaults have active strategies that are the same as what's described above with AURA rewards being deposited as graviAURA before distribution and BAL as auraBAL.

This article is the first of many to follow that dig deeper into the technical advancements to our vault technology along with newly developed tools to help users get a better understanding of exactly how the APY is calculated and functioning.

Earning more by doing less is no longer an oxymoron, but a reality for users looking to optimize their earning potential across the most prominent ecosystem players in DeFi.

Be relentless, Be Badgers.