With over $4b of weekly trading volume, the Curve (CRV) AMM is a backbone of DeFi and especially important in the stableswap space since the design allows very low slippage trades between assets assumed to trade at like value.

Convex Finance (CVX) is a metagovernance layer on top of Curve and has become the single biggest player in controlling where CRV token emissions flow. CRV incentives attract liquidity to various pools in Curve, which help stabilize the prices of some of the largest assets in DeFi. Convex has become so valuable that a secondary market, Votium, has sprung up for protocols to “bribe” CVX holders, in effect purchasing the liquidity driven by their votes.

BadgerDAO’s bveCVX product is the next layer of this stack. It simplifies the lives of CVX holders, making it easy to enjoy the economic benefits of holding the “DeFi kingmaker” token, without having to participate in governance votes and frequently collect and sell bribe tokens.

Since it was launched eight months ago, bveCVX has undergone several iterations before reaching its current state. This article presents the key benefits of this product in a Q&A format. If anything is unclear, please pop into the Badger discord and ask away.

Getting yield from CVX is a lot of responsibility (aka: work). You have to remember to lock it every 16 weeks, you have to vote in governance every 2 weeks, and collect bribe tokens and decide what to do with them (hodl, sell, lock, etc). Even for very large holders, it can amount to a part time job to manage and optimize the position.

bveCVX is for people who are interested in capturing the economic value of holding CVX but without having to perform regular transactions, some of which require ETH gas expense.

bveCVX is a “set and forget” managed CVX layer. All you have to do is deposit your CVX and Badger does the rest:

On June 30, 27,480,352 CVX (about 43% of circulating supply) will unlock and be available for sale or re-locking. This is the result of a bug that caused all CVX to be unlocked at once on March 4, 2022 instead of gradually as designed.

Ahead of the unlock, some have been heavily shorting CVX in anticipation of sell pressure, while other DAOs are hoping to scoop up cheap CVX. For more discussion of the dynamics around the unlock, see this recent Badger Office Hours recording.

How does voting work?

Every two weeks, protocols post bribes on Votium to attract CVX votes for CRV emissions to pools on Curve Finance. These incentives attract liquidity to their token pools and in turn support their token.

At each round, Badger’s bveCVX autovoter bot reviews the bribes on offer, selects the voting option that yields the highest ROI in bveCVX terms, and then votes accordingly. This is all done programmatically and does not require any multisig operations. When bribes become available, the system automatically sells them using Cowswap to minimize frontrunning. These rewards are then paid to depositors in a ratio of 75% bveCVX and 25% BADGER.

What are the fees and their purpose?

CVX locked in the Convex governance contract (vlCVX) cannot be sold before it unlocks (16 weeks from lock).

bveCVX offers users a limited amount of exit liquidity through an incentivized Curve pool. As of June 22, the pool held 61,000 CVX and 73,000 bveCVX (45/55%). This pool is not large enough to allow all bveCVX users to withdraw early, but provides a meaningful amount of exit liquidity, which is currently the deepest available among the managed Convex solutions on the market. Significantly more liquidity is available on the 16 week rolling unlock cycle, and you can always see how much CVX is currently withdrawable from the vault detail page.

The following graph shows the historical Curve liquidity depth of the bveCVX/CVX pool. 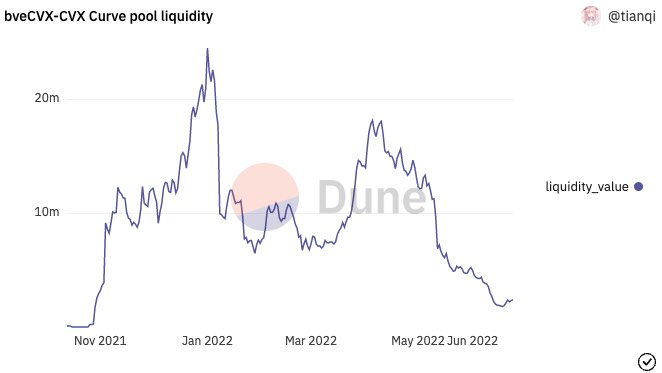 bveCVX has been operational as a core Badger product since September 2021. It was audited in 2021 by C4, the full audit results and mitigation steps are available here.