BadgerDAO was founded over a year ago with the mission to bring BTC to DeFi.

Over this time, incredible amounts of BTC have found DeFi. Trying to support decent yields on hundreds of millions of dollars of single asset BTC that had very low trading volume or other utility demands tended to be based on limited governance token alpha. It has been like squeezing blood out of a stone.

That stone has bled a few times, for a while, and when it did we learned a lot. Our biggest successes came from our time in the Curve Wars, and from that, we have developed a specialization in understanding and working with influence meta-governance tokens (CVX, OXD, SEX, AURA, etc).

Since the beginning of 2022, Badger has been quietly testing and learning with our influence tech, and the voting dynamics it enables. Following a period of bveCVX restructuring concluded by BIP-87, Badger core team member Tritium rallied some teammates to launch our next experiment, bveOXD. Following the launch, the crew moved on to thinking around Balancer. We’ve consolidated those learnings into a new product that we think has the potential to have a lasting impact on the way DeFi thinks about ve.

We therefore present to you Gravity, a project powered by Badger Tech, advised by Badger Economics, and governed by the $BADGER token. Gravity will focus on ve and influence-based insights, analytics, and products.

The Discovery Of Gravity

bveCVX started as an attempt to create sustainable yield on BTC. When we started building it, there was not really a bribe environment for CVX, and lots of retail holders were looking for a way to make income. bveCVX was designed as a system whereby BADGER would be paid to bveCVX stakers at a fixed APY in exchange for the vote weight. The vote weight would be used to vote for our ibBTC pool, which we would collect fees on from a yield farm we built on top of it.

This worked for a little while. Then the bribe environment grew to an extent where BADGER could no longer afford to pay competitive yields on sufficient amounts of CVX to support the hundreds of millions of dollars in BTC in the Convex pool. That, together with the fact that a decent amount of ibBTC liquidity sat outside the Badger app, and a lot of ibBTC liquidity in the app didn’t hold any significant corresponding amount of bveCVX, made BTC yields fall and bveCVX users unhappy.

After months of work with the BadgerDAO community and governance to find the right product/market fit, bveCVX has become a best-in-class product for earning autocompounding yields with liquid locked CVX that no longer has anything to do with BTC.

Our first attempt at BTC supporting bveCVX taught us about the Golden Ratio, in that it had no capacity to maintain it. Badger’s First Law of Yield Gravity states:

“To sustain yields on a pool  in a VE environment relative to emissions curves and token values  of the underlying rewards,  one needs a fixed  ratio between  the value in voting influence tokens and the  total value of liquidity one wishes to support.”

The DAO that has done this the best with CVX is FRAX, based on the way they algorithmically tied bribes, their own TCL, influence farming and vote management together.

We were interested in if there are ways to enforce a Golden Ratio, and/or build up a pool of free vote weight that the DAO could use to create an ecosystem and drive revenues to vaults we could either collect fees on or farm with our treasury. The Solidly experiment provided good ground for this, as it allowed permissionless gauges.

To experiment with this concept we launched bveOXD. bveOXD is different from bveCVX, only in how it votes. bveOXD votes with 100% of its vote weight for OXD/bveOXD LP. This voting dynamic was an attempt to fix the Golden Ratio at 50/50 and see how quickly it could grow and what would happen.

The end game with bveOXD was to have it grow large and become influential. Then to move to a voting system whereby DAOs could pair their tokens with bveOXD, and it would match their voting on that pool. The goal here was to become a center of gravity and a routing pair whereby DAOs could have a cheaper and easier way to bootstrap liquidity that collectively would create a potential AMM routing topology allowing efficient routing between bveOXD paired tokens.

In the end, the whole SOLIDLY experiment fell apart. There were critical problems with the fee and bribe allocations and the UI left a lot to be desired. There were way too many tokens given out in an airdrop, and farmed in the first short liquidity mining  event, leaving very little token supply for future emissions.

As a result, the market ended up flush with SOLID and OXD and the relative emissions became worthless. Despite all of that, and only launching just before the drop off in emissions with no startup capital or initial veNFTs, bveOXD still votes with 1.8% of all OXD for OXD/bveOXD LP each voting round and provides a sustainable source of yields in one of the most very micro of all ve-Ecosystems. It never moved beyond voting for its own pool.

We found the Golden Ratio of 50/50 explored in the bveOXD experiment interesting but not very versatile. It doesn’t allow Liquidity Pool creators to create liquidity between two or more tokens, and instead only allows a single “Solar System”, in which everything orbits around bveOXD.

Since the launch of bveOXD and veBAL, a graviton enthused group from the Badger Core team  has been busy trying to find a simple and versatile gravitational solution.

Something that can operate at the “base layer” and be used by other DAOs and anyone in the ecosystem to integrate all of our learnings over the past year into a source of sustainable liquidity and yield. 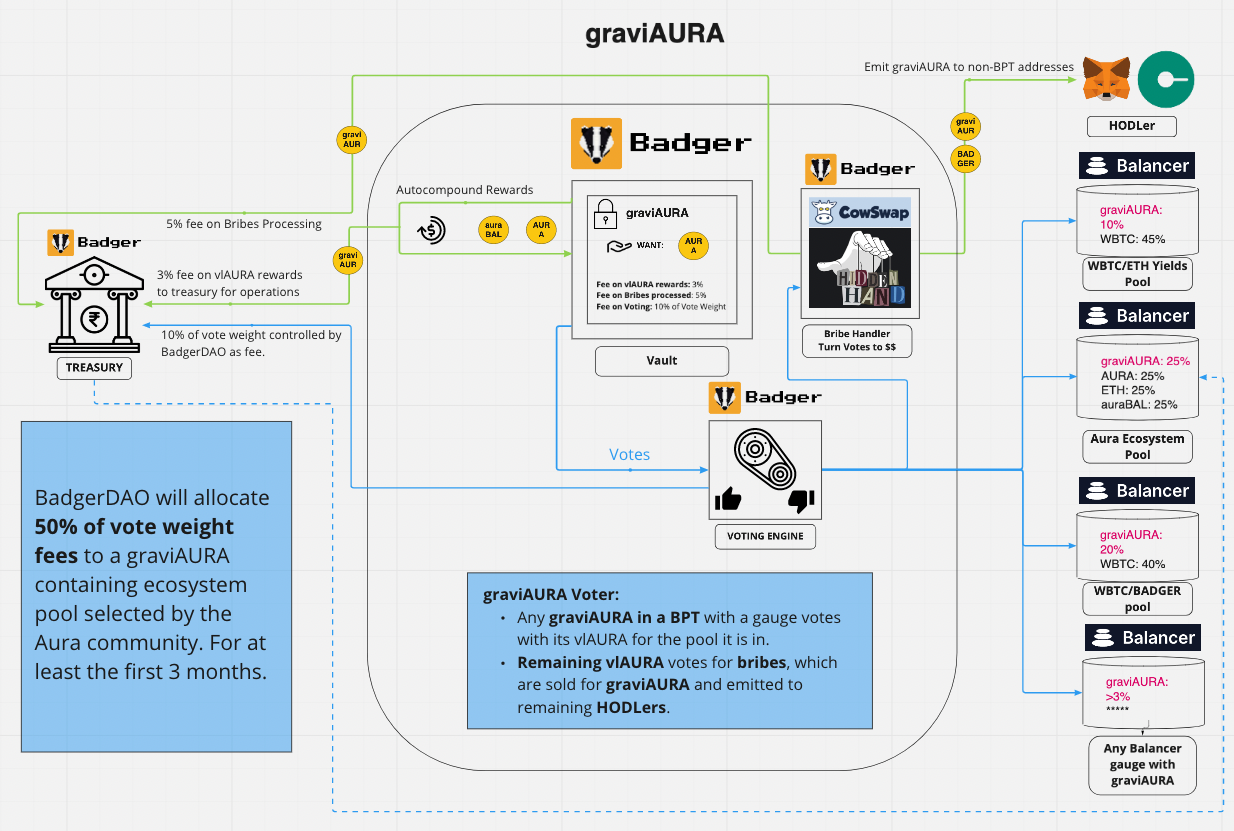 Aura is a Convex-type layer on top of veBAL, which is a fork of veCRV running on top of the Balancer AMM. graviAURA is an influence vault that, beyond bribe harvesting for individual users, votes for whatever Balancer (BPT) pool it is in. This allows for pools with variable Golden Ratios, that will be maintained by the underlying logic of the Balancer AMM.

Imagine a WBTC/ETH/graviAURA pool where 20% of the pool was always graviAURA, and ETH and WBTC both had 40%. If all the graviAURA in the pool (20% of the pool value) always voted for that same pool, the long-term yields would never fall below the value that 20% of the total AUM in the pool in AURA directed in a given unit time.

With AURA launch imminent, it is time to start educating fellow students of the gravitational arts about our new discovery, and about our new Product Division. We will be ramping up comms on a number of new channels dedicated to the Gravity Labs. As we do so, we will continue to work with our fellow students to launch our MVP on Aura/Balancer, do a bit of research, and analyze and publish the results.

Then, assuming our well-thought-out theories prove correct, we shall share our creation with the world, and allow all DeFi builders to simply integrate gravitational forces into their liquidity and yield farming strategies. Upon the emergence of such a complex system, there are also interesting learnings and investigations that can be done on “meshed” routing topologies between bveAURA-containing liquidity pools.